Basically, this is pretty much everything I could ask for in a UF novel, with the exception that it's rather less of a whodunit than I would like. For a while I was hoping it was going to be Dana. And while a revenge plot is just as good, I do count Count of Monte Cristo among my favorites , one generally wants more of an elaborate scheme on the part of the one getting revenge. That's the sort of potential misunderstanding that can very definitely screw with your sales, though whether it's net positive or negative sales-wise, I'm unsure.

So, scored on the merits, an excellent showing. But somehow despite all the awesome, I found myself exhausted while reading this. I'm going to spend the rest of this review speculating on why. Perhaps the most superficial of contributors to the perceived effort of the read, is the lack of chapters. 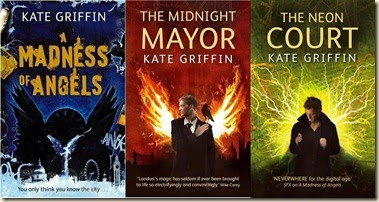 There's no generally agreed upon definition of what constitutes a "chapter" it's really just an arbitrary division of a longer text into chunks. The only divisions we get in A Madness of Angels are five parts. An 84 page "Prelude", three numbered "Parts", and a short "Epilogue".

This isn't the first book I've read without chapters, why does this matter? Well, while it may be a small thing, I'm fumbling in the dark here, people , in my experience, books with a lot of short chapters feel like they read faster.

It's an obvious feedback marker to the reader that they're making progress. And it's also reassuring that an obvious stop point is coming up soon if you want to take a break, or perhaps need to sleep. This might be even more significant in ebooks than it is in print given that you can't physically feel the progress on a kindle. The second thing I can point to that I'm sure had the hamster wheel in the back of my brain spinning extra hard is an issue with the timeline. The book starts with Matthew Swift coming back from the dead two years after being murdered.

At one point he says it's close to two and half years, but that's not enough difference to matter.


And I'm like, what?!?! It's completely unclear whether this entire organization is meant to have sprung up in the two years since Matthew's death, or it was there all along and Matthew is a clueless moron, or what. And I really had a problem with the idea that Bakker's top lieutenants would be people that were not even in his orbit a mere 2 years prior.

It strains credulity. This could have, should have, been resolved quickly and easily, Griffin just leaves it out there, festering for most of the book.

Question about the Resurrection of the Dead Saints in Matthew 27 - Dr. Shabir Ally

Much later, like, much closer to the end than the beginning, we learn Matthew completed his training at age 24, and picked up his own apprentice at 28, still not sure how old he was supposed to have been at the time of his murder , so it's plausible he was less close with Bakker in the years before his death. We also learn very late, that part of corporate structure of The Tower was formed very close to Matthew's death, so it is arguable that at least two of those people weren't in Bakker's inner circle before that.

But omg this drove me nuts for most of the book. The third thing I was definitely feeling the effort of this read by the one-third mark, where "Part 2" 3 if you count the prelude starts. But part 2 is where I actually began to feel like it was slow. Initially part 2 felt like a bit of a rinse and repeat of part 1 to me, but objectively, looking at a list of events, it was not, and neither did the pacing slow down much if we're to judge by a checklist of events.

I think now this was me becoming disengaged, and that comes down to the writing. Contrary to what you'd think from reading some GR reviews, "well-written" is extremely subjective.

A Madness of Angels

Not only in the sense that some people like flowery ornate prose, and some people prefer spare, unobtrusive prose, but ask ten people about the quality of the "writing" in a piece of text and none of them are even going to be considering the same aspects of the text in their mental definition of "writing". As for my own taste, on the one hand you have sadly little stuff like P. Wodehouse, whose sentences are so delightful they practically demand to be read aloud, and on the other, well, I don't know. But the point is when I say Griffin's an excellent writer, among other things, this means I'm not being slapped in the face by unparsable grammar and her sentences and word choice generally fall within the realm of what I consider aesthetically pleasing.

Apart from an odd flashback we get late in the book, where the cadences are wonderful and the sentence structures clearer and much easier going than the voice the rest of the book is written in, the prose is pleasing though not effortless to read. The issue for me might be the description, it isolation it's pleasing enough, but it might just be spread on a bit too think for me.

Sixteen words where twelve would do, so to speak. Not that any particular ones are bad, just the overall mass being a bit too much. Not an infodump type problem. Griffin never does that. But where you can skim or skip over a lump, it's hard to bypass when it's distributed evenly. The other aspect of the writing which could result in an engagement problem is the handling of voice and point-of-view.

First person, my least favorite person that we need consider as I will slap the fool who hands me second, can be handled in a variety of ways. In one, the narrator, the I of the story, speaks directly to the reader, as if having a conversation, or relaying a story to a friend.

It's intimate and the personality of the the narrator shines through.

See K. In another you've essentially got third person with the names and pronouns sanded off and replaced with "I". In A Madness of Angels Griffin is much closer to the second. This is significant for multiple reasons: 1. I think it's much easier to accept the narrator withholding information from or deceiving the reader when using the intimate style.

I actually think it's a huge missed opportunity in this book specifically. Matthew did not come back from the dead alone. As a consequence of that fact he's suffering a significant identity crisis. More interiority would have let the reader share in that. The identity crisis would have been fascinating in it's own right, but could have added suspense and deepened the emotional connection with Matthew. More interiority could also have increased suspense if we were allowed into his doubts and conflicted feelings about Bakker. Anyway, I noted that part of my issue in "Part 2" aka 3 was that we didn't seem to learn anything more about Matthew for that page chunk of the book.

A more intimate POV could have overcome that. Issues aside, this definitely earned the next book in the series a slot on my to-read pile, though I think I need to recuperate a bit before tackling it. As for the rating, a refresher on my rating system: 3 - meh This definitely tilts toward a five, but I'm not sure yet, and because I seem to have enough to grumble about I'm rounding down for now. And thank you for reading my long as the book review! Apr 26, Christopher rated it it was amazing Shelves: , fiction , supernatural. Though I greatly enjoyed both books this author wrote under her other pseudonym of Claire North, the only two people whom I both follow and reviewed this had extremely opposite reactions to the book.

An one star review of "Hands down, one of the most God awful books I've ever read. Ever," and a five star review well, 4. Needless to say, I was slightly nervous going in.

Thanks for signing up!

Plotwise, this is fairly simple. It you need a quick plot, this one isn't for you. Just walk on by.

It takes its time getting from point A to point B. What is excellent is the world-building. That there are entire entities that exist solely due to stray thoughts being left as people travel through the city is a great one. The entire city is alive with magic, and we are along for the ride as the angels experience it all for the first time.